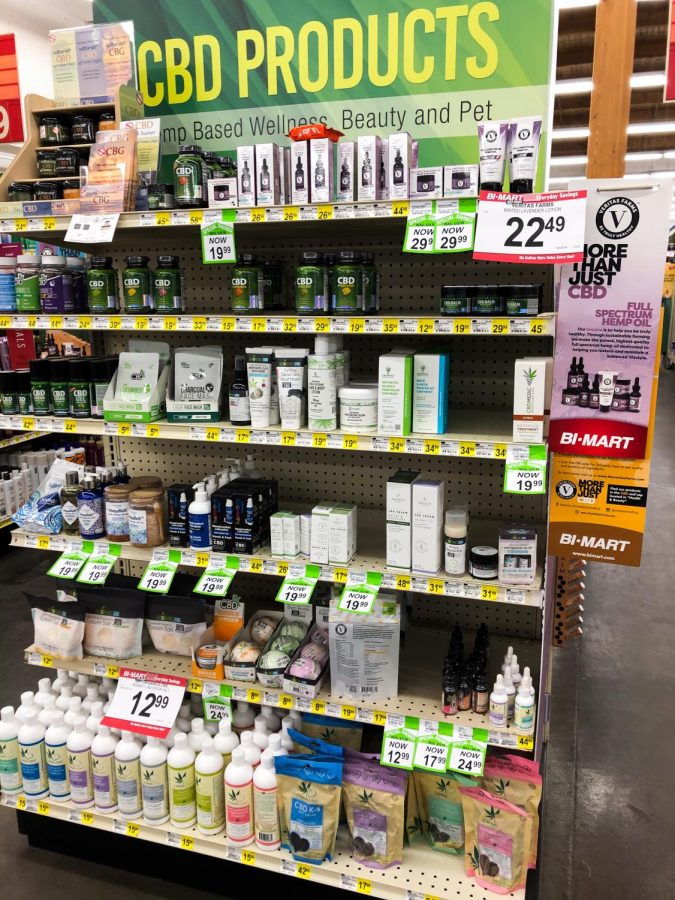 Cannabis Central Store Manager Margaux Ulstad wouldn’t call cannabidiol (CBD) a “super chemical,” but because of its many believed medical benefits, the business has found a diverse market for its CBD products.

“[Customers are from] all across the board; from the 21-year-old who has test anxiety to grandma who has arthritis,” Ulstad said. “I’ve literally seen every age, every gender, [come in] for just CBD.”

Ulstad said people with chronic ailments, like cancer, commonly use it. Or, like Ulstad herself, some just use it to help with common ailments like pain, stress and anxiety.

“My best description for a good CBD feeling is kind of like sinking into a hot bath at the end of a long day,” Ulstad said.

Part of the cannabinoid’s allure is its non-psychoactive properties.

According to Ulstad, many customers gravitate to CBD because they want the perceived benefits of cannabis but don’t want to get high.

She said she believes there is still a strong stigma toward marijuana and the psychoactive compound in cannabis called tetrahydrocannabinol (THC).

Because of the 2018 Farm Bill, hemp-derived CBD products that contain 0.3 percent or less THC are federally legal. Many are looking to capitalize on the new market, including cosmetic companies, culinary companies, and now, apparently, mattress companies.

Posted outside Cramer’s Home Furnishings on Main Street is a sign which reads, “Try our CBD infused mattress.” Store manager Greg Maes said he doesn’t know much about the product, despite having it displayed on the sales floor for two months.

“We brought it in on a recommendation from the manufacturer,” Maes said. “CBD is all the rage these days – I think that’s why we have it.”

According to its manufacturer, Therapedic, the B-Calm Solace mattress incorporates CBD through a topical coding and “microencapsulating technology.”

Therapedic’s website states that “research and anecdotal evidence suggests that CBD may help with both falling asleep and staying asleep,” although it doesn’t mention how the CBD in the mattress enters and affects a user’s body.

So far, Cramer’s hasn’t sold a single Solace mattress, and Maes said customers have reacted indifferently to the bed.

Ulstad is skeptical of the mattress, mostly because the product uses hemp-based CBD and doesn’t incorporate THC. She believes CBD products need a good ratio of THC in order to achieve their desired effects. By contrast, Marijuana-based CBD products, which are legal in Washington state, contain some THC.

“They act as a catalyst to each other; they work better together than they do apart,” Ulstad said. “There are receptors in the brain – and in your body, in your system – for THC. [There aren’t] any for CBD. So, the THC helps the CBD bond to those receptors as well.”

According to Ulstad, at legally licensed cannabis dispensaries like Cannabis Central, most CBD products sold contain varying amounts of THC.

Some of her best-sellers are a deodorant-stick-like topical called “Dragon balm,” fruit jellies (candy), oil tinctures, oil capsules and mints. She said the most popular products are those with a heavy CBD ratio (much more CBD than THC).

Another dispensary in town with a wide selection of CBD products is The Fire House on South Canyon Road. Sales associate Travis Tucker said the store has sold everything from bath bombs to medically infused sriracha sauce.

Does your dog need something to mellow out? The Fire House sells tinctures of CBD oil for them too.

“The fact that we have some in stock right now is crazy. It flies [off the shelves],” Tucker said. “Pretty much anything you could put marijuana in, companies are doing it now.”

Tucker believes the stigma toward cannabis is slowly fading. In his time with the store, he’s seen customers (generally from older demographics) go from shopping for CBD products solely to experimenting with other stuff around the store.

“When you mix [CBD and THC], it’s just better… the stigma is going down, for sure,” Tucker said. “We have something for everyone.”