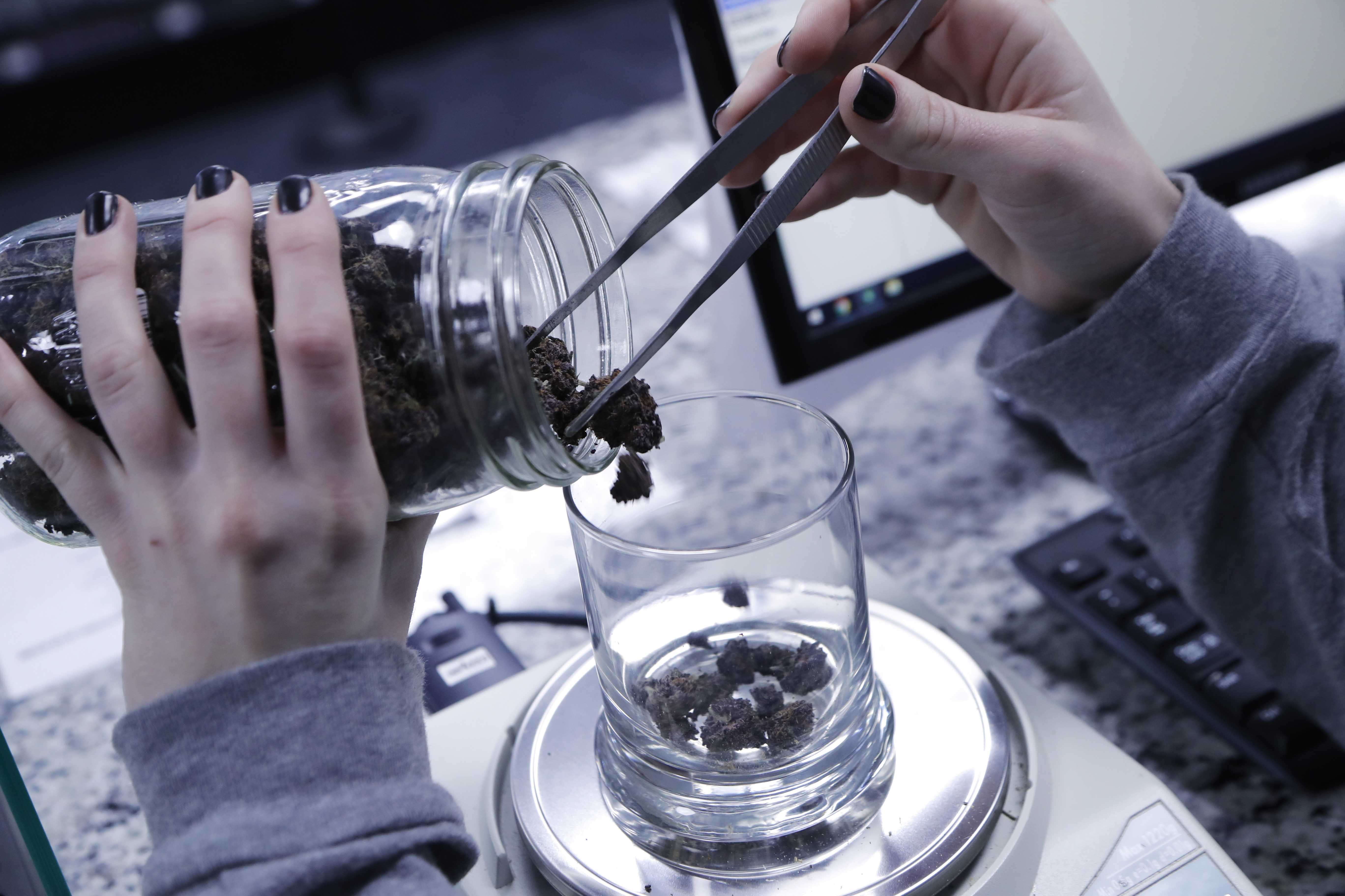 At first glance, Hamtramck, Mich., is like thousands of other cities across the country debating with whether to allow marijuana businesses to operate within its borders.

“It’s a microcosm of the sort of debate that you see happening across the country with cannabis,” said Benjamin Sobczak, chief legal officer for Pleasantrees, which opened Hamtramck’s first weed shop in November.

But in other ways, there’s no marijuana debate in the country quite like the one taking place in the densely populated city of 20,000-plus residents, and that’s expected to come to a head at Tuesday’s meeting of the Hamtramck City Council.

For starters, Hamtramck is almost entirely surrounded by Detroit — Michigan’s largest city, which doesn’t yet have any marijuana shops where anyone at least 21 can buy weed.

But perhaps more significantly, over half of the residents of Hamtramck — historically a Polish-American enclave — are Muslim, primarily people of Yemeni and Bangladeshi descent. That Muslim majority extends to the members of the Hamtramck City Council.

Even in the most liberal parts of the country where there’s widespread support for marijuana legalization, many cities still ban marijuana shops from doing business. While most Americans now think marijuana should be legal, that doesn’t mean they want weed shops or farms operating in their neighborhoods.

When Pleasantrees opened its doors, there was an immediate uproar.

Most of the horror was expressed by members of the Muslim community, but their concerns will sound familiar to residents of any municipality that’s debated how to handle marijuana businesses. In particular, they cited fears that crime will increase and that kids will have easier access to the drug.

“At the end of the day, we know who the majority of the city is — it’s Yemenis and Bengalis,” said City Council Member Fadel Al-Marsoumi, during a five-plus-hour meeting in December largely devoted to the marijuana debate. “They don’t want it here. We have to respect them.”

But the overwhelming majority of white residents who spoke at the meeting voiced support for allowing marijuana businesses to operate, often citing the city’s financial struggles as a reason to welcome them.

“I think the cannabis industry is a pot of gold,” resident Jean Johnson said.

Ultimately the City Council voted 4-3 to ban marijuana businesses from operating in Hamtramck, with the vote split along Muslim and non-Muslim lines.

But the City Council’s action came too late. Quality Roots obtained a license to operate a dispensary prior to the ban taking effect and opened its doors earlier this month. A third shop is expected to open soon.

“I’m a stack-it-high-and-let-it-fly guy,” Aric Klar, the owner of Quality Roots, said in an interview in December, a few weeks prior to the opening. “This is a place where we’re going to be able to make a very strong impact.”

How Hamtramck got here

The Hamtramck City Council first started wrestling with how to deal with potential marijuana businesses in the city back in 2018. Michigan voters legalized medical marijuana a decade earlier, but no businesses were operating in the city.

An ordinance was drafted to establish rules for medical marijuana businesses and town hall meetings were held to gauge public feedback.

The blowback, particularly from the Muslim community, was intense. Ultimately, in response to that pressure, the City Council dropped the ordinance.

“They wanted no part of medical marijuana, period, based on the pressure they were getting from people in the local community,” said Hamtramck City Attorney James Allen.

Under Michigan’s law, cities must proactively ban marijuana businesses from operating within their borders. Hundreds of municipalities have taken that step. Many other cities have drafted ordinances to limit how many businesses can obtain licenses and where they can operate, often sparking costly legal fights.

In Hamtramck, an ordinance to ban marijuana businesses came up for a vote in October 2019. However, it ultimately failed, largely because two Muslim council members who were expected to back the ban didn’t attend the meeting.

Instead, Hamtramck did nothing. That left the door wide open for Pleasantrees and other businesses to obtain the requisite licenses and open for business.

“They kind of looked at Hamtramck as an ideal place to put their businesses and they started to invest accordingly,” Allen said, noting the close proximity to Detroit.

But the blowback once the first pot shop opened was immense. That led the City Council to quickly ban additional businesses from obtaining licenses. Allen cautioned, however, that the outcry from angry residents and the ensuing action by the city council was no different from what’s played out all across the country.

“They’re doing what American politicians do: They’re listening to their constituents,” he said.

The mayor also insists that the issue isn’t simply a divide between the Muslim and non-Muslim communities. She points to a recent debate that was held on the issue and the wide range of comments that surfaced from people of various ethnicities.

“It’s not a simple matter of saying Muslims are against it, Christians are for it, and that this demonstrates a larger cultural divide in the city,” Majewski said. “When you talk to people privately, it’s probably a lot more complicated than that.”

What’s next for Hamtramck?

There’s little chance that the current ban on additional marijuana businesses will hold.

During the City Council meeting where the ordinance banning pot shops was adopted, a proposal to establish regulations for the existing businesses was offered. However, that measure was rejected by the Council.

Hamtramck resident Linda Ward said she thinks rejecting that ordinance was a big mistake. She worries that the city is opening itself up to litigation by failing to apply a uniform set of rules for potential marijuana businesses.

“I’m a homeowner here in Hamtramck,” Ward said. “I don’t want to see my property taxes go up for something so silly, when they just could have put in an ordinance to regulate them instead.”

Ward is now leading a citizen revolt against the marijuana business ban. Under Hamtramck’s city charter, an ordinance must be reconsidered by the City Council if a petition requesting that action receives signatures equivalent to 15 percent of the votes in the last mayoral election.

Ward and her allies say they have secured enough signatures to meet that threshold. That means the City Council will be required to reconsider the ordinance. If it fails to do so, then a referendum will be held in which voters would decide whether to back the ordinance banning marijuana businesses.

The soonest that could happen under state law, however, would be May, according to Allen, the city attorney. In the meantime, the ordinance would be on hold, meaning an unlimited number of marijuana businesses could continue to get licensed and open for business in Hamtramck.

What the City Council will do is difficult to discern. None of the four members who backed the ban in December responded to requests for comment from POLITICO.

But most observers expect the Council to punt when the issue comes up, which is likely to happen at the next council meeting on Jan. 26. That would mean the ordinance is invalidated until voters weigh in.

Pleasantrees’ Sobczak said the dispensary is in favor of the effort to override the ban on additional marijuana businesses, even though it would almost undoubtedly result in greater competition for the fledgling pot shop. He said it would be hypocritical to try and keep other businesses out after arguing that Pleasantrees will be a positive influence on the city of Hamtramck.

“That’s talking out of both sides of your mouth,” Sobczak said. “We try to stay consistent with our messaging here as a company that believes in what we’re doing.”