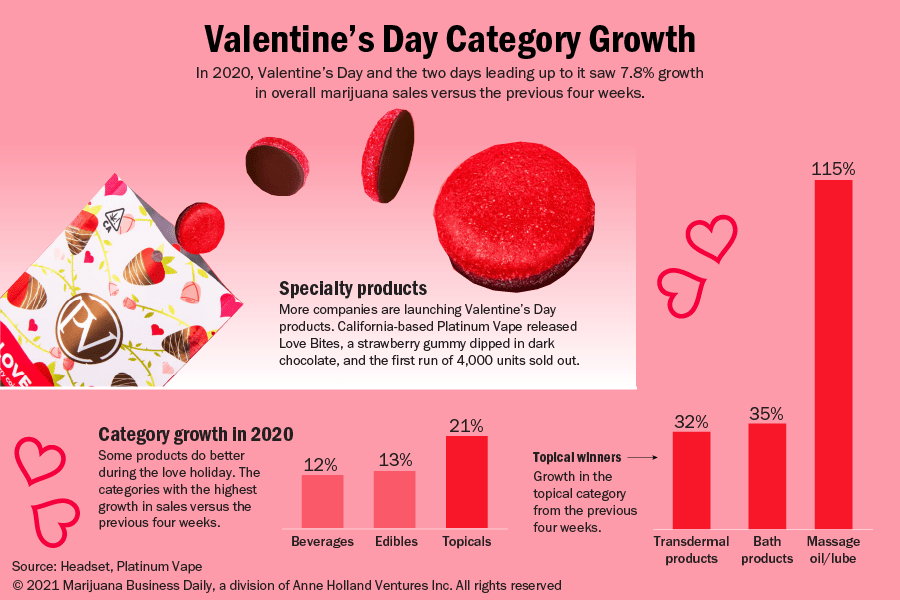 Topicals are a sliver of the overall cannabis market, but around Valentine’s Day, when many couples try to spice up their sex lives, the product category rides Cupid’s arrow to higher sales.

Sales of topicals around the 2020 Valentine’s Day holiday – including massage oils, bath salts and lube products – were up more than 20% over the previous four-week period, according to Headset.

Sales of edibles and beverages were up more than 10% for the same period.

The rosier sales numbers aren’t a romantic coincidence but part of a concerted effort by a growing number of marijuana companies to court new customers and leverage love to rev up revenue.

“It’s a great way to introduce people to cannabis because it’s an intimate, special holiday where people will try things. They’ll try them with a partner. It’s an ideal cannabis introduction holiday,” said Lisa McClung, CEO of Coda Signature, an edibles and topicals manufacturer with operations in Colorado and California.

Cultivators, product manufacturers and retailers in legal marijuana markets across the United States are creating products and promotions tailored for the holiday and tasking in-house and third-party designers with creating packaging that kindles customer curiosity.

“It shows that the cannabis industry is becoming very mainstream. Just like you would walk into Trader Joe’s or into your local grocery store, you’re going to see Hershey or whoever’s baked goods that are geared to the season,” said Janet Matula, a product specialist manager with Platinum Vape, a California company that, in addition to vapes, sells edibles, flower and CBD topicals.

Typically a dispensary wallflower, topicals get their Cinderella moment in February.

Last year, the product category enjoyed almost 21% relative sales growth during Feb. 12-14 versus the previous four weeks. Sales of edibles sales were up nearly 13% and beverages 12%, according to Headset.

Further, Headset reported, the topical segments with the highest relative growth in sales compared to the previous four weeks were:

“We put together a promotion that we wanted to provide a sensory experience. How many of the five senses could we help enhance people’s Valentine’s Day?” McClung said.

While topicals and edibles enjoy increased Valentine’s Day sales, the industry as a whole does much more modest business compared to other occasions.

In 2020, Valentine’s Day – which fell on a Friday – and the two previous days (Feb 12-13) experienced a modest 7.8% growth in overall sales of marijuana products overs the previous four weeks, Headset reported.

By comparison, the sales increase from the unofficial cannabis holiday 4/20 is about 50%, TGS President Steve Lopez said.

“It does have a slight uptick, but it’s not like 4/20,” she said. “We thought it could actually have more traction … because it doesn’t necessarily have the uptick that I would expect it should have.”

That said, Coda is making a more-focused effort to take advantage of Valentine’s Day – and other seasonal occasions – to boost business. However, the effort is focused not only on creating more short-term revenue but also:

“The packaging and flavors and quality ingredients can go together and be a special moment,” McClung said.

“But they also can introduce people to something that will keep them coming back to the store.”

While some businesses take existing products and bundle them for special occasions such as Valentine’s Day, others create specialty, limited-run products that can also drive revenue.

The company produced about 4,000 units – a unit being a bag with 10, 10-milligram pieces – that were released in the final week of January and sold out before February.

Because of the success of that first run, Platinum Vape did a second run exceeding the number of units in the first run that was delivered to stores this past week, Sadler said.

In the past, Platinum Vape did some extra advertising around special occasions such as Valentine’s Day.

But only in the past few months has the business made strong efforts to take advantage of seasonal occasions by developing special products.

For example, Platinum Vape has also developed limited-run products for Christmas and Day of the Dead.

Not all marijuana businesses hit it off on Valentine’s Day, however.

Karyn Wagner, an executive with the Paradigm Cannabis Group, a California firm with extraction and edibles divisions, said the company’s Sexxpot subsidiary, which offers a low-potency pre-roll, has struggled to find dispensaries willing to try Valentine’s Day promotions.

The problem: Most executives at dispensaries picking the products to sell are men, Wagner said.

“They don’t get it that women want sexual-enhancement products. They just don’t get it,” she said.

Wagner added that while dispensary owners have gotten cold feet with Sexxpot, budtenders’ feedback is that it’s a product that can sell.

“Why wouldn’t you want to have products that engage with older women who could be part of your demographic,” she said.

Omar Sacirbey can be reached at [email protected]